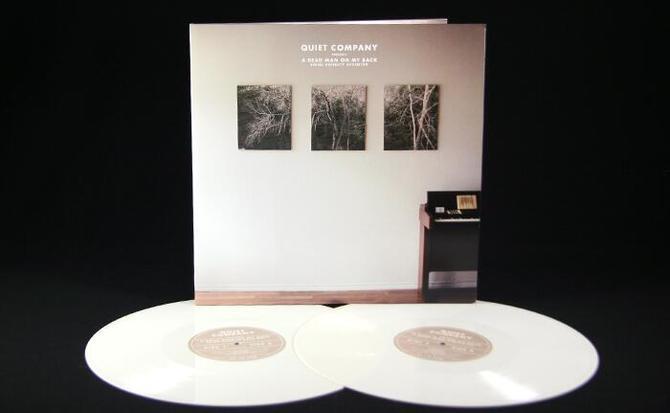 A Dead Man On My Back 2LP White Vinyl

A Dead Man On My Back: Shine Honesty Revisited on Double White Vinyl
Release Date: April 9, 2013

Out of print and unavailable for nearly three years, Austin indie rockers Quiet Company have gone back to their beginnings to re-release their 2006 debut album, “Shine Honesty.” But instead of merely shipping decade-old recordings to a pressing plant, lead singer/guitarist Taylor Muse and his bandmates have completely re-recorded and updated the album to reflect how Quiet Company has grown and changed musically as its stature has grown.

The record, to be released digitally and in select national retailers on April 9, was recorded at bass player Matt Parmenter’s Ice Cream Factory Studio and features two new tracks, “Gun Control Means Using Both Hands” and “And You Said It Was Pretty Here.”

With more time, musicians and resources at his disposal Muse was able to add depth to the album, like recording live strings instead of using synth versions or fixing mixing and intro problems that were overlooked in the blur of mixing and mastering one of his first recorded pieces of music. The updated and revitalized version of “Shine Honesty” also gives the band full ownership of its early recordings after languishing under the control of Northern Records, which released “Shine Honesty.” With master recordings under its control, Quiet Company will be able to properly promote an overlooked portion of its catalog and make those songs available for their fans once again in an updated & much-improved version of the album.

Tracklisting:
1. How Many Times Do You Want to Be in Love?
2. Fashionable
3. Well Behaved Women Rarely Make History
4. Tie Your Monster Down
5. ...then Came a Sudden Validation
6. I Was Humming a New Song to Myself
7. The Emasculated Man and the City That Swallowed Him
8. Love Is a Shotgun
9. So Gracefully
10. Circumstance
11. I've Got a Lot of Problems With You People
12. We Change Lives
13. When You Pass Through the Waters
14. ...and You Said It Was Pretty Here
15. Gun Control Means Using Both Hands